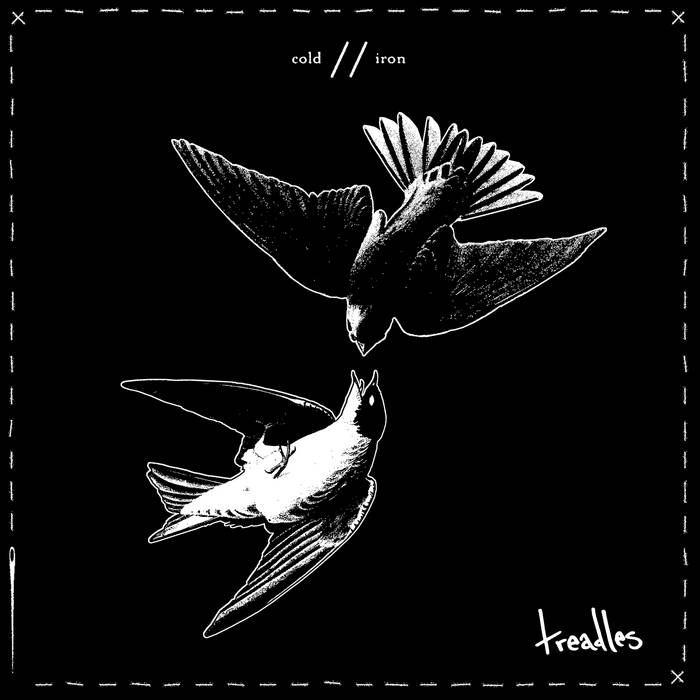 Taking inspiration from the original concept behind the founding of Saddle Creek, as an attempt to highlight our home city through music and art, we began the Document Series in 2017. Each release featured in the Document Series is comprised of an exclusive record featuring unreleased music from artists outside of the label's roster, along with a specially curated zine created by the artist. The eighth installment in the series is Cold b/w Iron from New Orleans, LA based Treadles.

In the winter of 2016, KC Stafford started working on new material with collaborator Rick Maguire in an attempt to shift gears after the sudden break up of their former band, Woozy. From this collaboration came the songs "Cold" and "Iron" (based on an original by Maguire known as "Blood”).

"Iron," at its core, is about longing. It explores the feelings of loss and frustration that the harder one tries to hang on to a fading love or a sudden inspiration the faster those things slip away. The refrain "I want to feel its love all the time" is taken directly from Maguire's song "Blood" though it changes the original refrain of "I want to see its blood all the time" to "love" and builds an entirely new song around this premise.

"Cold" was inspired by a winter sunrise at a gas station in Oklahoma. The cold, weak sunlight and endless-seeming flat plains stretching in every direction inspired an intense feeling of loneliness and desolation that the song tries to capture. It's also a reaction to the terrible end of the band Woozy, repeating a desperate refrain of "try not to think about it" in increasing fervor til the sudden end.

Treadles began in the summer of 2011 as the solo project of KC. It was a lo-fi, folksy, bedroom pop experiment with their father, who was learning to record music as they were learning to play guitar. From this collaboration, Treadles grew into a live band, performing in backyards and at acoustic events and featuring a rotating cast of players from projects such as Sun Hotel, Caddywhompus, Donovan Wolfington, Shark's Teeth, and Museyroom. After a break to focus on life and other projects, Treadles reformed in the fall of 2016, now a loud, dynamic, grunge-pop project with a more permanent line up including members Rustle Pants, Emily Hafner, and Ian Paine-Jesam. 2019 sees the addition of guitarist Sedef Switch. Members play in a variety of other projects including Little Death, Shark's Teeth, Dowsing, Ratboys, and Thou. Previous releases include a 6 song EP out on Community Records entitled Bees Are Thieves Too.

no longer just a lump of coal

Bandcamp Daily  your guide to the world of Bandcamp

Guest hosted by Tamar Osbourn aka Collocutor and Toshio Matsuura.